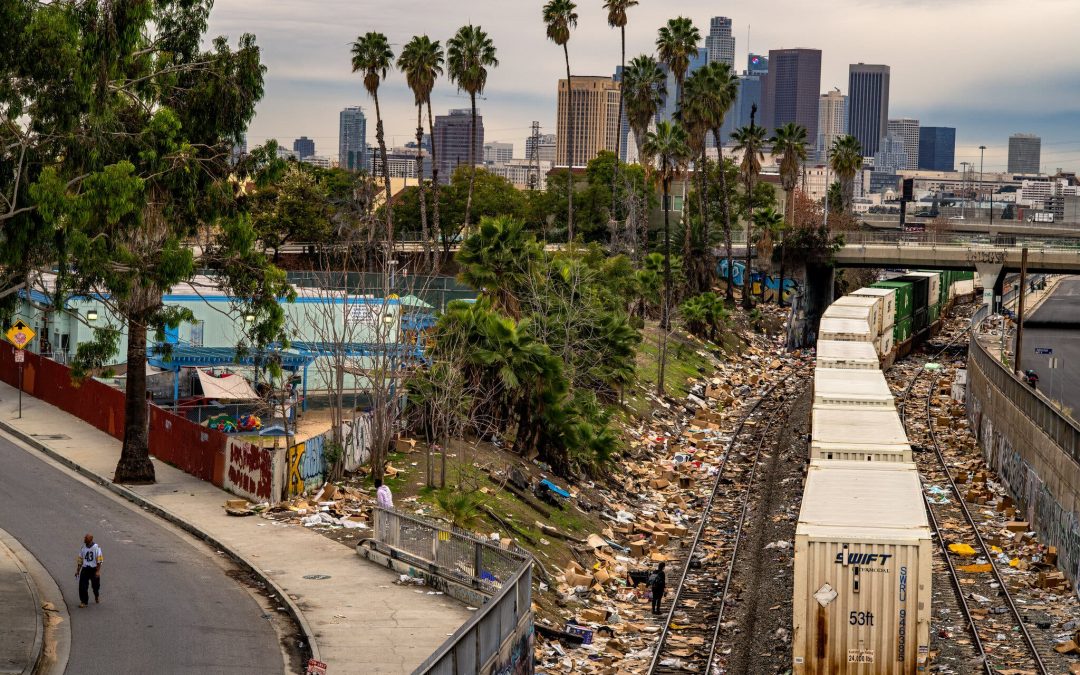 You may have seen the viral images of piles of debris on Los Angeles railroad tracks being shared across the news as mid-January 2022 came to a close. These images tell a grim story, where cargo containers on idle trains were broken into by thieves. And this isn’t a one-time event, these “land pirates” have been raiding shipping containers in the area for months.

Why is this happening? The pandemic has forced many people to begin shopping online, creating a huge increase in cargo theft. While the containers and trains are locked, they can be broken into with bolt cutters and other equipment.

Railroad theft is a crime of opportunity, with opportunity growing every day. Our team discusses what happened and how Los Angeles County is planning to move forward. 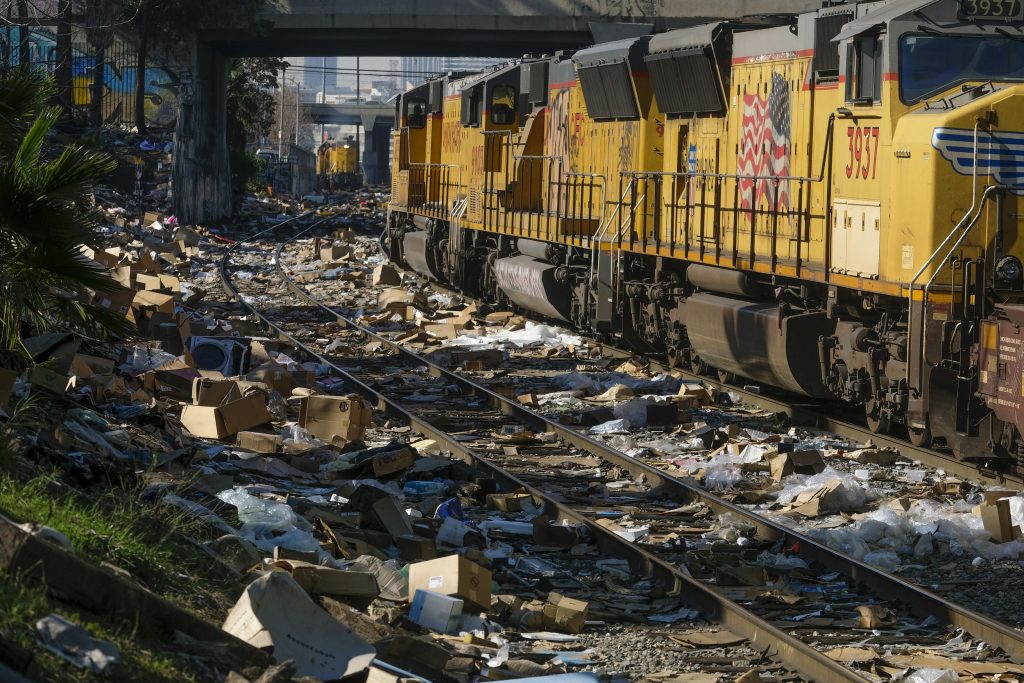 Southern California is a global hub for cargo, and train cars filled with valuable consumer goods crisscross hundreds of miles of track at all hours of the day and night. The continued supply chain congestion sometimes causes trains to sit idle leaving them vulnerable to thieves waiting to pounce. An idle train is a train at risk.

Cargo car robberies don’t only occur at night but are ongoing 24/7. Thieves will break into the containers with box cutters, regardless of whether they are stalled or moving, and throw goods out the doors to someone waiting below to load them into a vehicle. Sometimes they open the boxes right there near the tracks to see what’s inside, take what they want, and leave the rest. It’s madness.

Union Pacific asserts that losses, claims, and damages are at about $5 million.

Under federal law, Union Pacific and other railroad companies are allowed to employ their own police force to protect the tracks, but budgetary challenges have slashed the ranks of the railroad police force, leaving just half a dozen officers to patrol the tracks.

Union Pacific officials have been working with the LAPD, the California Highway Patrol, and the L.A. County’s Sheriff’s Department to help combat the thefts. The railroad company is also deploying drones and is building fences. 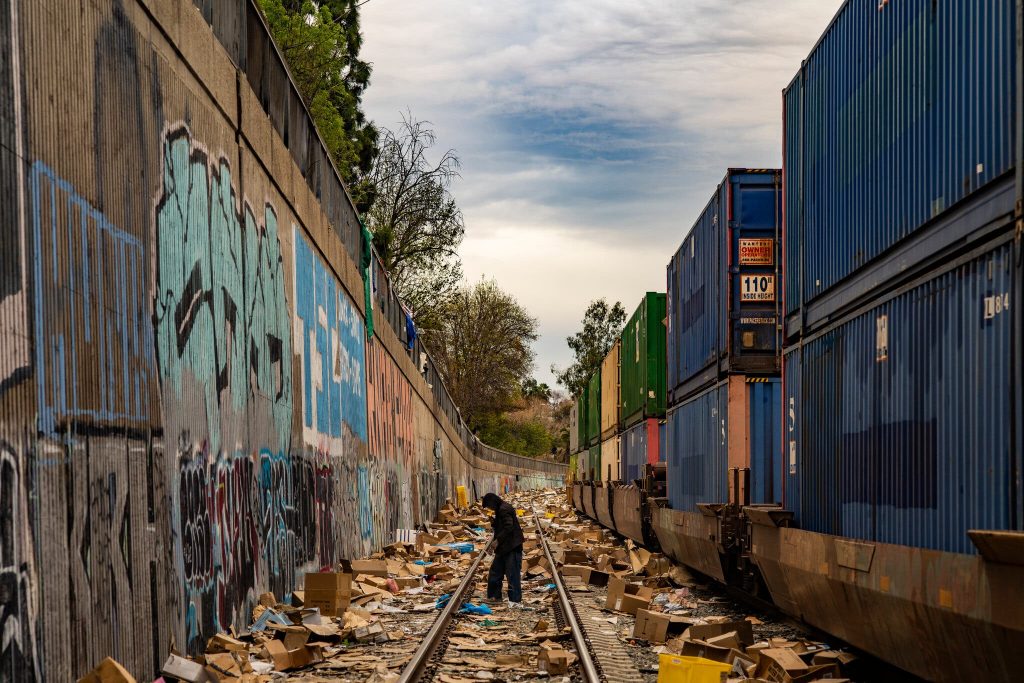 Union Pacific, founded 160 years ago and based out of Omaha, Nebraska, oversees over 3,200 miles of railway in California. The unprecedented occurrences of container break-ins in Los Angeles are unlike others that the company has experienced in the past.

Rail thefts in California have jumped 160% since December 2020 with an average of 90 compromised containers a day.

Union Pacific stated that most “land pirates” target boxcars near rail yards where cargo is transferred from trucks to trains. Since 40% of cargo comes through the Ports of Los Angeles and Long Beach, these yards are a key link in the supply chain for warehouses, national retailers, and other companies.

No cargo type has been immune to these thefts, and bandits are targeting both outbound and inbound trains. Last week, scavengers said that they found everything from Louis Vuitton purses and Amazon packages to robot parts.

Train theft does occur at other hubs throughout the country, but it is particularly hard to guard the cargo trains around the Lincoln Heights neighborhood in L.A. County due to the area’s geography. The railroad tracks dip below street level and are out of sight in the urban valley of walls and shipping containers.

In October 2021, as suppliers were ramping up for the busy holiday season, Union Pacific reported that thefts surged 356% compared to the same period in 2020. Criminals even went as far as to assault and carry out armed robberies against railroad employees. Is this the Wild West?

What Can Be Done?

Law enforcement, legislators, and former Union Pacific employees argue that the company doesn’t provide enough security and officers, fencing, and other protections to prevent crimes around its 275 miles of railroad in L.A. County.

According to LA County Sheriff Alex Villanueva, in recent years, the specialized unit that focused on railroad cargo thefts was eliminated due to funding cuts. He says that his office, along with federal agencies and the Union Pacific is working on a plan to add more security and policing along the tracks.

Union Pacific says that it may avoid operating altogether in L.A. County following the thefts. Officials of the rail company believe that the justice system is too easy on these criminals. Union Pacific officers have arrested more than 100 people in the past few months, but have not been contacted in any court proceedings. Most thieves are let go without jail time or even a fine.

In light of recent thefts and robberies, you might be wondering how to secure your shipping container office or storage space. Not to worry! Our proprietary DRP locking system is designed to resist a thief’s attempt to pry, sledgehammer, or breach the security system on your shipping container. The best part? There is no way for bolt cutters to be used!

If you want to enhance the security of your shipping container, call on our modification team here at A American Container and we’ll ensure that your storage or office space is protected from thieves. Call us today for a quote—(813) 740-1911!